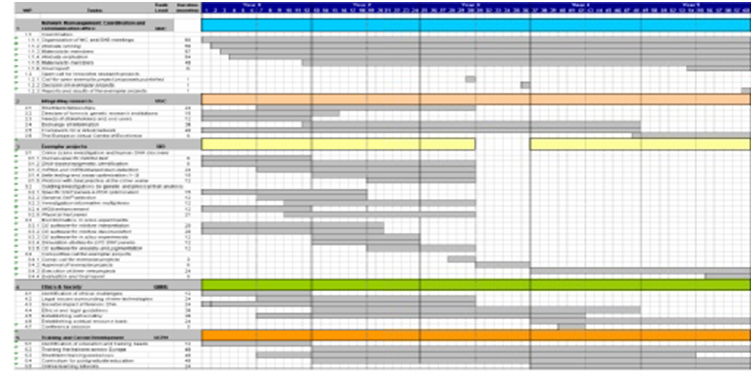 The Consortium has achieved an unexpectedly good visibility in our field of interest as a result of very intensive dissemination activities: we have shown presence at major congresses and working group meetings, by introducing aregular newsletter, by introducing a Facebook group that has already more than 130 members, and by continuouslyexpanding the information content available on our website. It is evolving into the website of the “Virtual Institute ofResearch in Forensic Genetics” (see D2.4; table 4 below). A central activity was the publication of an open call for researchproposals (D1.5; table 4), to invite three new research partners, and a total of 17 proposals have been submitted. This is aclear sign of the tremendous interest in this area of research, as well as of the fact that a dramatic lack of publicfunding sources for research in forensic genetics does not offer many possibilities to submit proposals.

As documented in the WP3 deliverables, a long list of original research papers has been published, and more dataare in their final stage of analysis to be published in the very near future. Although this may be considered a delay inthe execution of the project, it is rather a sign of the tremendous success of our research work, as the available datawere so abundant that it was impossible to get these published in time. The adjustments in the work plan asdescribed in the last report allowed us to integrate new technologies such as “next generation” sequencing methods.

Starting from the results of our educational survey (D5.2) we have identified “Biostatistical interpretation of DNAevidence” as the most important topic for advanced education. The workshop series “Train the Trainer” has beenintroduced (D.5.3) providing advanced education for colleagues from all over Europe. Two workshops have beencarried out already, and two more “satellite” workshops have already been organized at the national level in Spainand Italy. This kind of activities clearly demonstrates the need for education, and we will organize two more TTTworkshops in the next two years. The newly introduced “career development board” will develop an appropriatecurriculum that encompasses all relevant areas of knowledge for scientists and experts involved in forensic DNA analysis.

The societal impact of forensic genetics and the potential for ethical or legal conflicts are major factors of the publicperception of forensic DNA typing. We have already observed that there is a high diversity among the Europeancountries regarding acceptance or critical awareness of these technologies in the public. We hope to raise the overallawareness of opportunities and challenges related to DNA profiling and to stimulate the public debate on theseissues. Competent resources and efficient strategies will be applied to the work carried out in the other workpackages in order to encourage an ongoing awareness amongst operational scientists and criminal investigators ofthe ethical and social pitfalls-issues that surround their work, and the importance of public trust for ensuring itssuccess. To this end, the Ethics Group within the consortium is aiming to build a base-line analysis of what aregenerally understood to be the major current issues in social, ethical and policy aspects of forensic genetics. Asystematic review in the form of a “Social and ethical risks report” will be used to inform the subsequent work of allcontributors to this work package. This work includes the analysis of legislative frameworks and other regulatorymechanisms for the governance of forensic genetics in the states of the European Union. It is envisaged that thedevelopment of ethical guidelines for research and deployment of forensic genetic technologies used in criminalinvestigations and prosecutions will have a major impact both on the scientific community as well as the generalpublic. The existing reports on Social, Ethical and Policy Aspects of Forensic Genetics, the Legal Audit, and onResearch into Public Concerns, as well as the ethical guidelines will all be made available on the Consortium WebSite and will also contribute to the education and training goals. We are confident that the currently achievedrecognition among scientist and stakeholders in the field can be expanded into the general public at the end of the funding period.