For more information about the project, we invite you to watch the videos, by clicking on the image or through the link below it.

There were an estimated 3,566 people per 100,000 with a past diagnosis of any type of cancer in the European Union in 2003, equivalent to a prevalence of ~17.8 million [3]. With increasing life expectancies and improvements in diagnosis and treatment, the number of cancer patients and survivors is expected to continue to rise. For example, the estimated number of cancer survivors in the United States increased from 9.8 million in 2001 to 11.7 million in 2007 with 22% accounted for by breast and 19% by prostate cancers [4]. As the illness increasingly becomes a chronic disease, cancer patients’ quality-of-life needs to be addressed in a systematic manner in order to enhance their participation in society, including the workplace.

Being Radiotherapy an important curative treatment for cancer,however, (unavoidable) irradiation of surrounding healthy tissue will cause toxic side effects. This toxicity varies in severity, from minor to severe, nature (psychological or, for example, rectal bleeding in prostate cancer survivors) and in duration, from weeks to a lifetime. These long-term side-effects have been shown to impairQoLof cancer survivors [9].

The field also suffers from a lack of standardization in data collection [6,7] and, at present, it is not yet possible to predict who will develop long-term side-effects. Therefore a prospective multi-centre observational study is/ will be the best way of developing and validating both clinical models and biomarkers that predict for risk of long-term side-effects following radiotherapy.This requires systematic reviews to identify approaches for ameliorating those and the design of interventional clinical trials to reduce them.

Finally, although a number of approaches have been explored, no biomarker has been validated for clinical use. Involvement of SMEs is important in this context to bring in technical expertise in assay validation and  in development of marketable clinical tests.

The main goal, and central concept of REQUITE, is to develop validated clinical models incorporating biomarker data to identify before treatment those cancer patients who are at risk of developing long-term side-effects from radiotherapy, to identify the best interventions for reducing the side-effects and to design interventional trials aimed at improving the quality-of-life of cancer survivors who underwent radiotherapy.

All of them, and the corresponding WPs, can be seen at figure 1 below: 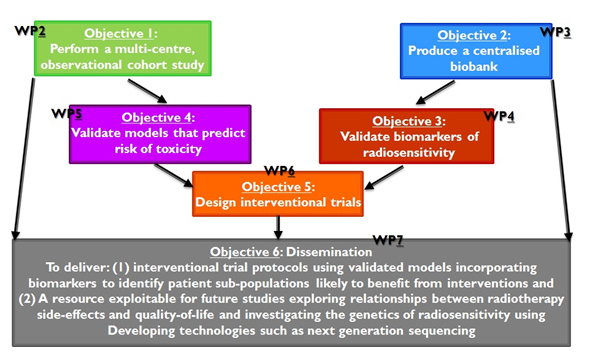 To fully appreciate the strength and meaningfulness of the project’ goals, the current state-of-the-art vs the progress to be made is summarized in table 1:

Details on the WPs and interrelations within the project are shownin the chart below (figure 2): 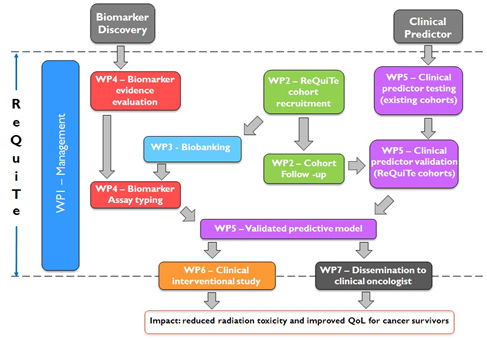 The work-packages of the ReQuiTe form part of a tightly integrated project with a clear long-term focus on improving quality-of-lifeof cancer survivors. The project builds on existing evidence of clinical factors and biomarkers that may affect risk for long-termside-effects following radiotherapy, validating them in the new cohorts to create statistical models which can be applied inclinical practice for patient benefit. The leads of each WP have an existing track record of working together through theRadiogenomics Consortium, so are ideally placed to co-ordinate the different strands into an effective whole leading to asuccessful outcome.

The list of activities (WP and sub- WP; figure 2) have been scheduled as shown in the cronogram below: 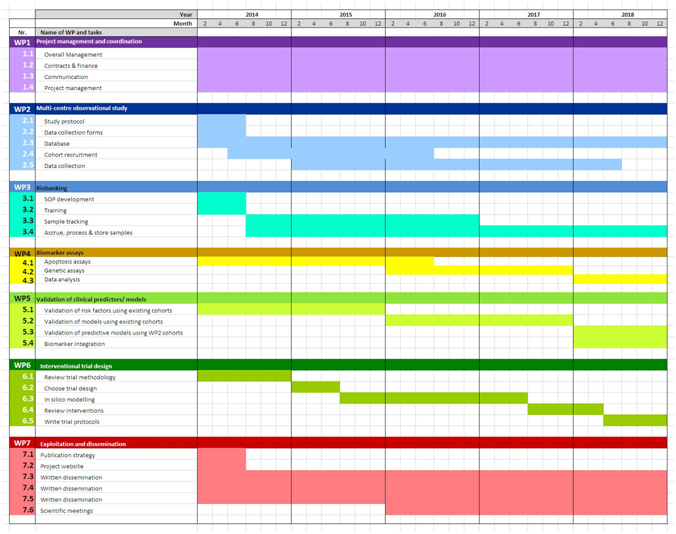 Partner 1 is responsible for overall management and scientific oversight of the project; co-ordination with patient advocates, theethics group, the steering committee and the external advisory group; budgetary control and monitoring of project progressand milestones; co-ordination between work-packages and organisation of annual meetings. Management will be based atUNIMAN.

Ethical aspects are important for the multi-centre observational study, biobanking, biological assays and the design of interventional studies aimed at improving the quality-of-life of cancer survivors. Local ethics committees for each partner organisation must approve the project. An Ethical Review Group, formed within the consortium, will review and provide advice on ethical aspects of the project in liaison with a Patient Advisory Group. The project’s Steering Committee ensures partners adhere to ethical rules, as described in the Consortium Agreement. Copies of ethical permission have been requested in anticipation and filed in the Management Office.

Key features of the Ethical Review Group are that comprises the clinical leads for the enrolling centres for the interventional study and other clinical and scientific members nominated by the Steering Committee and the Patient Advisory Group. The chair was elected democratically. The roles are/ will be to:

In order to emphasize how ReQuiTe objectives align with the h2020 flagship initiatives on Health [i.e. Innovation Unit, Digital Agendas (new skills and jobs) and Platform against Poverty], the expected project impacts are summarized in the table below:

Literature (state of the art prior to project’s start and progress beyond).

The literature search and revision done for the occasion indicates that, although currently unclear as to what interventions are appropriate, there is a recognized need to developapproaches for identifying patient sub-populations most likely to benefit. Systematic reviews will help identify the most appropriate interventions as will additional evidence that emerges in the next 4-5 years, which can be taken into account in the interventional trials that will be designed in REQUITE.

Derived publications and/ or otherproject contributions (by 01/08/2014).