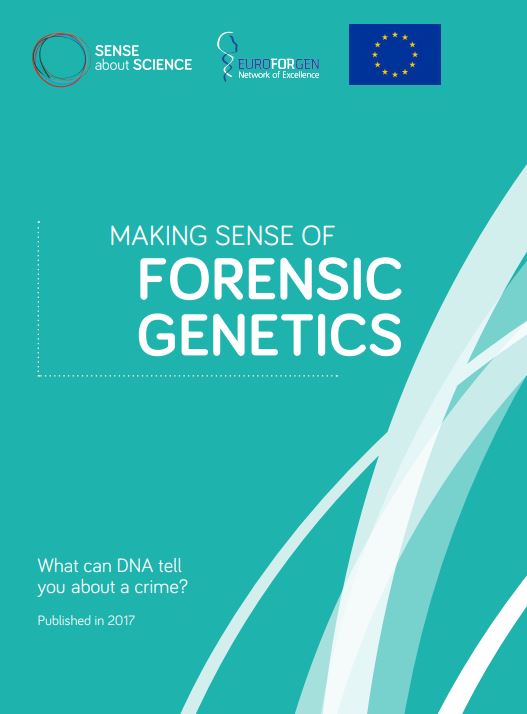 What can DNA tell you about a crime?
Forensic genetics is an increasingly complex field and its use in the criminal justice system is often misrepresented and misunderstood.

Published: 25 January 2017
All our guides are date stamped and reflect the scientific findings and knowledge available at the time of publication.

We all enjoy a good crime drama and although we understand the difference between fiction and reality, the distinction can often be blurred by overdramatised press reports of real cases. As a result most people have unrealistic perceptions of the meaning of scientific evidence, especially when it comes to DNA, which can lead to miscarriages of justice.

DID YOU KNOW…? We’re constantly shedding skin cells into our environment. But not everyone does this at the same rate. People who shed lots of skin cells — ‘high status shedders’ —are more likely to deposit DNA. A recent study found that people with atopic dermatitis shed four times as much DNA as healthy individuals.

DNA is present in most cells of our body. It is unique to each of us, and we leave a trail of it everywhere we go. Forensic investigators take advantage of this, using our DNA to draw conclusions about where we’ve been and who we’ve interacted with. DNA analysis has revolutionised forensic science. However, forensic experts have raised concerns that how DNA can be used in criminal investigations and in court is often misunderstood and misrepresented.

EUROFORGEN researchers invited Sense about Science to work on a public engagement project, to address these misconceptions and produce Making Sense of Forensic Genetics. This guide shares what DNA analysis can currently do in the criminal justice system, what its limitations are, and what might be possible in the future. It includes graphics and real-life cases where DNA evidence has been a game changer in investigations as well as where its misuse has led to miscarriages of justice. We hope this guide will be a useful resource to anyone who works with, or crosses paths with DNA evidence in the criminal justice system.

This guide was the result of a public engagement partnership with forensic DNA researchers at EUROFORGEN (European Forensic Genetics Network of Excellence). See their declaration of interests. The guide has received financial support from the European Union Seventh Framework Programme (FP7/2007-2013) under grant agreement n° 285487.

WHAT IS THE PROBLEM THIS GUIDE IS ADDRESSING?

Forensic genetics is an increasingly complex field and its use in the criminal justice system is often misrepresented and misunderstood. For example, some police departments are currently using forensic DNA technology that has not been scientifically validated. The researchers from EUROFORGEN were prompted to launch this guide by public misconceptions about forensic genetics, and aim to inform readers about how DNA can and can’t be used in criminal investigations and in court.

Manfred Kayser, Professor of Forensic Molecular Biology, Erasmus MC University Medical Centre, Rotterdam and EUROFORGEN researcher:
“Currently eye colour, hair colour and skin colour can be predicted reliably and with practically useful accuracy from crime scene DNA. However, our knowledge of the genetic basis of human facial structure is not advanced enough for us to reconstruct a face from DNA. For responsible use of forensic DNA phenotypic tests, it is essential that methods and validation studies are published in peer reviewed journals and are open to scrutiny.”

Denise Syndercombe Court, Reader in Forensic Genetics, King’s College London and EUROFORGEN researcher:
“We all enjoy a good crime drama and although we understand the difference between fiction and reality, the distinction can often be blurred by overdramatised press reports of real cases. As a result most people have unrealistic perceptions of the meaning of scientific evidence, especially when it comes to DNA, which can lead to miscarriages of justice. As we developed this guide, even readers who were professionally involved in criminal justice were surprised by some of the information it contained: this particularly showed me how important the guide is in explaining science that, though complex, really does need to be widely understood.”

David Bentley QC, criminal defence specialist, Doughty Street Chambers, London:
“As criminal cases come increasingly to rely on DNA evidence, getting to grips with this challenging and rapidly developing topic is becoming an essential skill for the criminal lawyer to have. This excellent guide provides clear and accessible information that will help lawyers (and others) to understand both the strengths and the limitations of forensic genetics, and to be able to recognise and deal effectively with issues that may arise at trial.”

Peter Schneider, Professor of Forensic Molecular Genetics, Institute of Legal Medicine, University Hospital of Cologne, Germany and EUROFORGEN coordinator:
“The collaboration with Sense about Science made a big difference for us; it was positive beyond expectations. They worked smoothly and efficiently to convert very complex information into simple and straightforward messages, and instructive graphics. Continuously receiving feedback from key audiences including police, lawyers, judiciary, journalists and interested readers during this process was essential to allow the EUROFORGEN researchers to adapt the guide to make it as accessible as possible for a wide audience.”

Emily Jesper-Mir, Sense about Science
“It’s fantastic to see researchers caring about the impact of their research has on wider society, making important information clear and accessible for those that need it – in this case from lawyers, police, judges through to potential jurors and crime fiction fans. Throughout the process, researchers listened and adapted content especially for these audiences. This is one of several public engagement partnerships we’ve worked on – to share sound science where there are high costs of getting it wrong. We commend EUROFORGEN for taking on this approach, and want to see more researchers involving the public to develop understandable resources.”