Sudden cardiac death is a serious health problem that affects a high number of cases of general population but also affects apparently healthy young individuals. A large number of pathologies are involved in its development, characterized by a great phenotypic and genotypic heterogeneity. Some of these pathologies on which we focus our studies are: 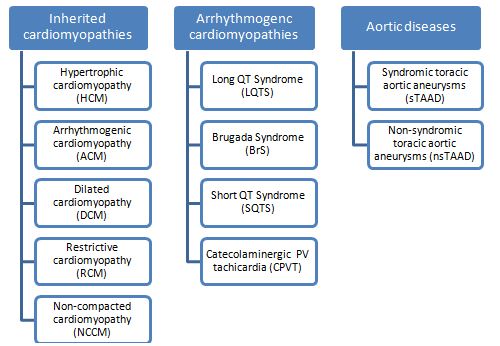 A large number of mutations have been described in a large and growing number of genes involved in the development of these pathologies. Our line of study focuses on:

-The application of massive sequencing for the genetic diagnosis of these pathologies.

-To look for new genes responsible for pathologies by means of whole exome sequencing studies.

-To look for genetic modulators helping to predict the risk of adverse events in arrhythmogenic cardiopathies and aortic pathologies.

In developed countries, sudden infant death syndrome (SIDS) is the leading cause of death in children between one month and one year of age. Epidemiological studies have described a number of related environmental factors, but the cause is still unknown. So far, an extensive number of theories have been proposed to explain this syndrome and all of them agree that these deaths result from the complex interaction between genetic and environmental factors that occur in a vulnerable period of development. Our main interest is to identify these genetic factors:

-We study the implication of genes associated with MSC in young adults.

In spite of the great success obtained during the last few years in the treatment of cancer, the lingeringcardiotoxic side-effects from chemotherapy remain a major cause of morbidity and mortality in cancer survivors. Precise mechanisms by which thesedrugs affect the heart remains unknown. Moreover, the genetic rationale as to why some patients are moresusceptible to developing cardiotoxicity has yet to be determined. Identification of biomarkers that allow us to anticipate the development of this cardiotoxicity is of great importance to reduce its incidence and to be able to act early in case of suffering it. Existing evidence supports the hypothesis that genetic variation contributes to chemotherapy-related cardiac dysfunction, and the identification of these genetic variants will help to improve risk stratification and thus improve cardiovascular outcome. Our main objective is the identification of genetic markers to identify the risk of cardiotoxicity induced by chemotherapy, allowing the development of a pharmacogenetic test for application in clinical practice in order to reduce the incidence of cardiotoxicity and associated cardiovascular events.